The richest man in the world was once a supporter of President Joe Biden, but over the past year Elon Musk’s relationship with the White House has turned sour.

The two men have continually traded jabs since Biden took office in 2021.

Most recently, the president appeared to mock Musk’s fixation with outer space in response to a question regarding the billionaire’s comments that the US is in the midst of a recession.

In his response, the president highlighted Ford’s investment in electric-cars and its union over Tesla.

Biden went on to add: “So, you know, lots of luck on his trip to the moon.”

The barb was just the latest example of an ongoing feud between two of the most powerful men in the world.

It wasn’t always this way.

Last month, Musk said he planned to vote Republican in the next presidential election, but the billionaire said he’s voted “overwhelmingly” for Democrats in the past.

In fact, Musk worked closely with the Obama Administration in SpaceX’s early years and has said he voted for Hilary Clinton, as well as Biden in the past two US presidential elections.

Shortly after Biden was inaugurated, Musk told Fortune he was excited for the new president to take office and that he planned to work closely with the Biden Administration on efforts to address climate change.

Though, Biden may not have been Musk’s first choice for a candidate for the Democratic party. Last December, Musk said in a tweet directed at US Senator Bernie Sanders (D-Vermont) that the US should set an age limit that would not allow people over the age of 70 to run for office — a measure that would disqualify both Biden and former President Donald Trump.

Less than a month into Biden’s presidency, Musk began to express discontent with some of his choices. 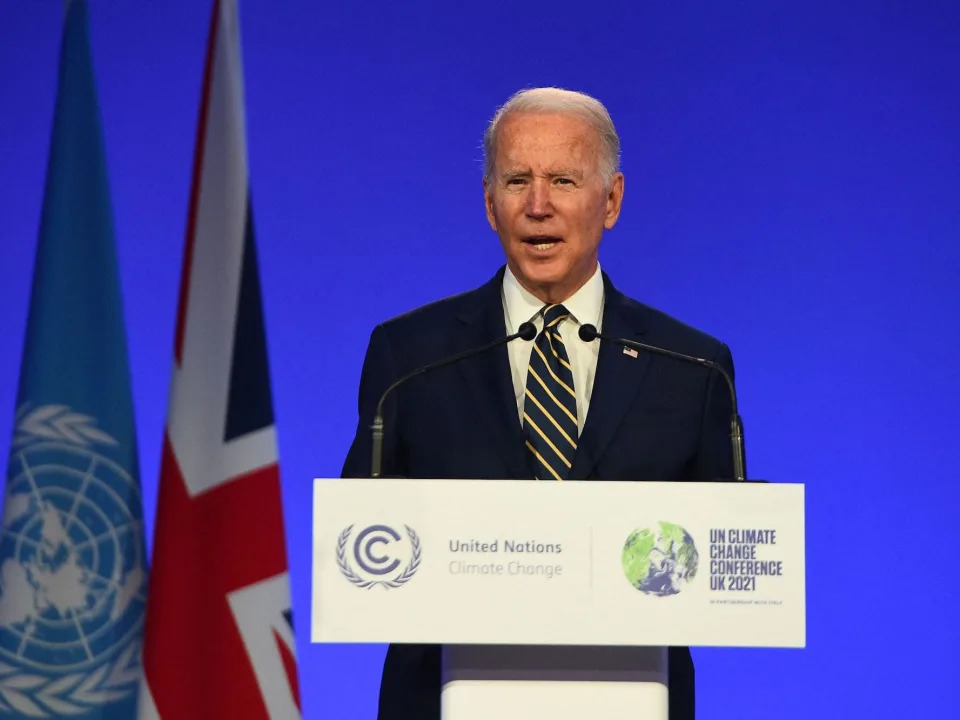 In February, Musk said the Biden Administration rejected his idea of a carbon tax as “too politically difficult.” The Tesla CEO made the comments during an interview on the “Joe Rogan Experience” podcast.

“I think the Biden administration should take a strong stance on the situation,” Musk said. “It’s like at least half the reason they got elected.”

Musk has been calling for a carbon tax since 2015 and has said he is more than willing for SpaceX to pay the tax for emissions during its spaceflights and tests in Boca Chica, Texas.

Last summer, the feud between Musk and Biden truly began to take shape after the president failed to invite the CEO of the largest electric-car maker in the US to an EV summit at the White House.

At the time, White House Press Secretary Jen Psaki was asked during the press briefing whether Tesla was being excluded from the event because its employees were not part of an automotive union.

“I’ll let you draw your own conclusion,” she said.

Musk has repeatedly criticized some of Biden’s most significant political agendas.

Musk dissed Biden’s Build Back Better agenda in December and said during The Wall Street Journal’s CEO Council that the administration should scrap the $2 trillion package altogether.

In particular, the CEO took issue with legislation that would authorize a tax credit up to $12,500 for Americans if they bought an electric vehicle assembled by unionized workers. The bill would exclude Tesla altogether, while propping up companies in the United Auto Worker’s Union (UAW) like Ford and GM.

Musk has also been critical of a tax plan from the Democratic Party that would target US billionaires. At the time, the legislation could give the billionaire an annual tax bill of $10 billion.

“Eventually, they run out of other people’s money and then they come for you,” he wrote on Twitter in October.

In January, Musk had strong words for Biden, calling him a ‘damp sock puppet.’

The Tesla CEO spoke out after Biden once again met with executives from Ford and GM regarding EV adoption and failed to include Tesla.

“I meant it when I said the future was going to be made right here in America. Companies like GM and Ford are building more electric vehicles here at home than ever before,”

Musk first commented on the post calling for Biden to acknowledge Tesla.

“Starts with a T, Ends with an A, ESL in the middle,” he tweeted.

It was one of several times that Biden and his administration appeared to exclude Tesla from discussions on electric vehicles.

Biden has had little to say about SpaceX. 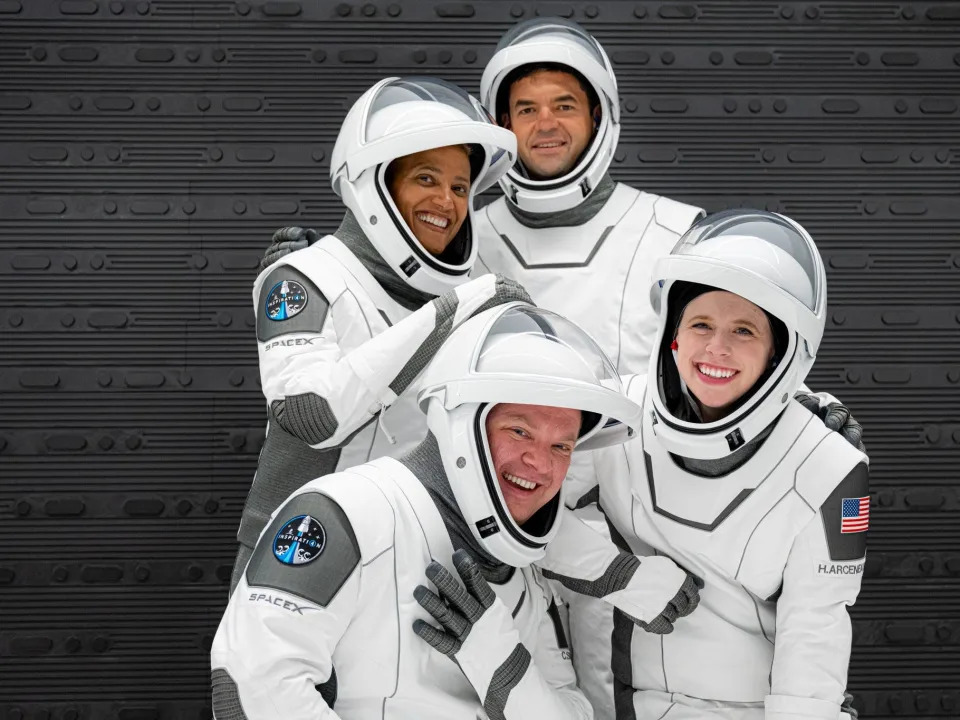 The Inspiration4 crew members pose together in their SpaceX spacesuits.Inspiration4/John Kraus

Outside of Tesla’s role as a top EV company, SpaceX has also taken a large part in the nation’s efforts to return to the moon.

After a Twitter user commented on Biden’s silence, Musk tweeted “He’s still sleeping” — a reference to digs against Biden from the Republican Party, some of whom dubbed him “Sleepy Joe.”

Biden has taken several opportunities to praise GM and Ford for their foray into electric cars, but has had little to say about Tesla.

The president has also made appearances at GM and Ford factories, and taken test drives in their upcoming electric pickup trucks, but has been notably absent from Tesla’s massive Fremont Factory.

In February, nearly 40,000 Tesla fans signed a petition on Change.org calling for Biden to acknowledge Tesla and its role as the leading electric-car maker in the nation.

“The White House and the Biden Administration have intentionally been trying to ignore Tesla’s hard work while propping up GM and others as ‘EV Leaders,'” the petition said. “This is an insult to the Americans who work for Tesla.”

The petition came after the president again met with executives from Ford and GM and publicly lauded them for “building more electric vehicles here at home than ever before.”

Biden acknowledged Tesla earlier this year, following pressure from Musk and his fans.

But, only a month later, Musk was again displeased after Biden didn’t mention Tesla in his State of the Union address after mentioning Ford and GM.

“Tesla has created over 50,000 US jobs building electric vehicles & is investing more than double GM + Ford combined,” Musk wrote on Twitter in response to a post on the speech from the president’s official Twitter account.

Much of the tension between Biden and Musk likely comes down to Musk’s response to unionization efforts at Tesla.

Biden’s tax incentives, as well as his statements on GM and Ford, have focused on their unionized workforce. Meanwhile, the Tesla CEO has taken an active stance against the UAW.

In March, Musk taunted the union with an invitation to Tesla’s Fremont Factory, alongside a clip of former UAW members criticizing the union.

In 2017, some Tesla workers sought to unionize with the help of the UAW, but reportedly faced backlash. Last year, the National Labor Relations Board ruled that Tesla and Musk “unlawfully threatened” workers hoping to unionize. The group said Tesla “interrogated” employees involved in the effort and ordered Musk to delete a tweet it deemed “anti-union.”

Last month, the feud between the two men appeared to come to a head when Musk said he no longer plans to vote for a Democratic candidate in the upcoming presidential election.

“This administration has done everything it can to sideline & ignore Tesla,” Musk wrote on Twitter.

The tweet came while Musk is in the midst of purchasing Twitter. The billionaire has said he plans to reinstate Trump after he was banned following the siege on the Capitol last year.

“In the past I voted Democrat, because they were (mostly) the kindness party,” he added. “But they have become the party of division & hate, so I can no longer support them and will vote Republican. Now, watch their dirty tricks campaign against me unfold.”

Before he announced his plans to switch political parties, Musk said Biden was only elected because people “wanted less drama.” The billionaire has said he supports “centrist candidates.”

Musk has been quick to criticize Trump as well. In May, he said a “less divisive” candidate than Trump would be better for the 2024 presidential run. In 2016, Musk was outraged over the Trump administration’s decision to exit the climate-focused Paris Agreement, though in 2018 the SpaceX CEO said he liked Trump’s idea for a Space Force military branch in outer space.

Biden is not the only one Musk has taken digs at.

The richest man in the world has repeatedly taken swipes at the head of Russia’s space agency, as well as fellow billionaires Jeff Bezos,  Mark Zuckerberg, and Bill Gates.

The White House also has an ongoing feud with Bezos.