Max Verstappen took a huge step towards defending his Formula 1 title after winning a frenetic French Grand Prix ahead of Lewis Hamilton, as main rival Charles Leclerc threw away his chances with a dramatic race-ending crash.

Leclerc had looked set to control after leading early from pole and had withstood a Verstappen onslaught before his race – and his championship bid – took a huge turn on the 18th lap thanks to a costly unenforced error.

The Monegasque driver lost control of his Ferrari car at Turn 11 and spun into the barriers, prompting gasps from a sell-out crowd and a huge outcry of emotion from Leclerc on team radio.

That propelled Verstappen into the lead, one he capitalized on with a comfortable victory to extend his championship advantage over Leclerc to 63 points.

Verstappen won from Hamilton on his 300th race as Mercedes enjoyed a super Sunday, with their seven-time world champion starting well and then easily holding off rivals behind to take second, his best finish of the season. 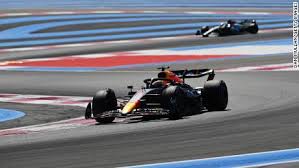 Max Verstappen closes out a comprehensive victory at the French Grand Prix with Mercedes securing a double podium behind him.

George Russell made it a double podium for the Silver Arrows after passing Sergio Perez with three laps remaining, catching the Red Bull driver cold after a late Virtual Safety Car, and then holding off a late charge.

Carlos Sainz was fifth after a fine recovery from the back of the grid but deserved more.

The Spaniard had advanced to third before Ferrari, in another odd strategy decision, pitted him with 10 laps remaining. Sainz also had to take a five-second penalty due to an unsafe release in the pits, and he couldn’t make up the places in time before the 53rd and final lap.

Alpine and McLaren continued their fierce midfield battle behind, with Fernando Alonso – who got ahead of Russell at the start – a solid sixth ahead of Lando Norris.

Esteban Ocon overtook Daniel Ricciardo for eighth, making up for an early penalty for tangling with Yuki Tsunoda. The AlphaTauri driver was one of four retirements, as many drivers made contact during a combative race.

That was the case for the battle for the last points position too, with Lance Stroll and Sebastian Vettel battling all the way into the final corner.