Max Verstappen sent a secret text about Lewis Hamilton moments after his high-speed crash at the British Grand Prix last season, according to World Touring Car star and ViaPlay F1 pundit Tom Coronel. Verstappen apparently sent the message while on his way to hospital after the 180mph crash at Copse Corner. There was much debate as to whether the heavy collision was Verstappen’s fault or Hamilton’s as the pair went wheel-to-wheel.

Coronel messaged Verstappen to ask if he was okay after the heavy shunt and claimed the Red Bull star messaged him back three minutes later. His reply, shared with Express Sport in an exclusive interview, was received at 4.18 pm UK time, just over an hour after his car smashed into the barrier.

It read: “Cannot cope with the pressure that guy hahaha. Don’t worry Tommy, we’re gonna beat him this year.” Speaking about the message, Coronel said: “I had Max on the WhatsApp when he was on his way to the hospital from Silverstone.

“I tell you he never complained he was pushed out, never. He just said Tommy don’t worry we will catch him.” 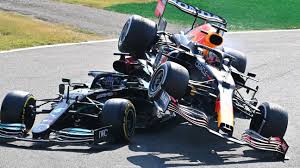 “He is just saying haha the guy cannot cope with the pressure and we are going to kick back this season. Then you do not have balls, then you have skippy balls. This shows to me the mindset, Max, the mind is so strong, so strong.”

The incident was one of the flashpoints between the pair in an incident-filled session. Hamilton went to the inside at Copse but Verstappen swung in front in an attempt to fend him off.