Thor meet… Thor. Natalie Portman’s Jane Foster is all set to wield Mjolnir in Thor: Love and Thunder alongside Chris Hemsworth’s God of Thunder. How she gets hold of the hammer is being kept under wraps, but Portman has opened up to Total Film for the latest issue’s cover feature on her MCU comeback as “Newbie Thor.”

“It’s exciting to get to be a superhero,” Portman says, having appeared as Jane Foster in Thor and Thor: The Dark World. “And there’s no guidebook that comes along and tells you how to do it.”

Newbie or otherwise, Portman certainly looks the part. Jane Foster’s imposing new look was all down to Portman. “The only thing we assisted with was making the Mighty Thor a little bit taller,” laughs Marvel Studios president Kevin Feige. “That was the only movie magic we used. Everything else was all her.”

On the preparation required for Foster’s Thor-some return, Portman explains, “I trained for a long time before and during, and I was doing the whole protein shakes [thing]. It really helped prepare me for the level of action that we ended up doing.” 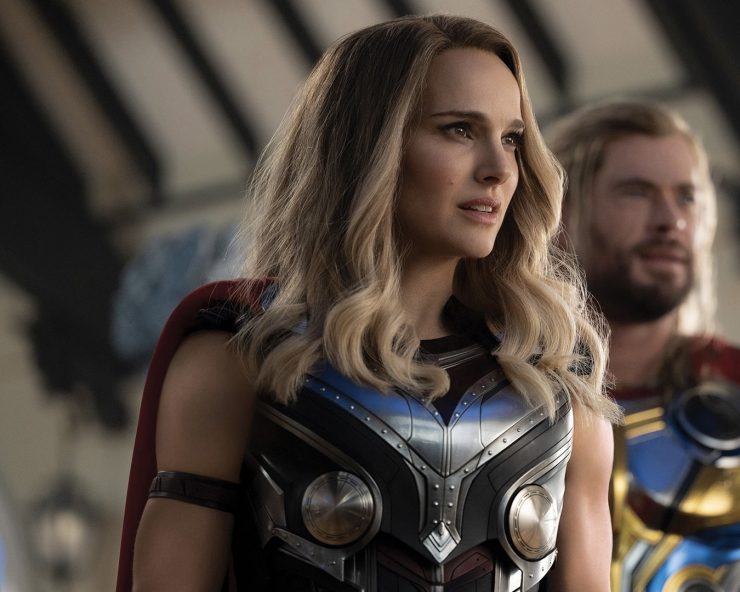 She adds: “We had incredible stunt doubles who did the really hard stuff, but there’s still a great deal of running and jumping and swords and hammer-fighting. It was definitely helpful to be strong. To have that weight of the cape all day, you want to have some upper-body strength.”

As for the Love in Love and Thunder? Jane Foster and Thor called it quits off-screen, but Hemsworth teases they’ll get into the story behind the breakup: “We had a lot of fun exploring that, and answering a lot of the unanswered questions from the second film [onwards], when they parted ways,” says Hemsworth. “That was left pretty open, and up for interpretation, as far as: who dumped who? What actually happened there? Did they keep in contact? What were their feelings about how that all ended? We had some good times diving into all of that.”