Tyson Fury is adamant Oleksandr Usyk will ‘batter’ Anthony Joshua next month in Jeddah but reiterated he will fight the challenger for free at Wembley should he get revenge on the Ukrainian.

The Gypsy King announced his retirement from boxing in April after successfully defending his WBC heavyweight title against Dillian Whyte at Wembley, but has since flirted with one final rodeo.

He said: ‘I’d train him to beat Usyk very easy, but he doesn’t want my help because I would definitely train him to win and he obviously don’t wanna win. 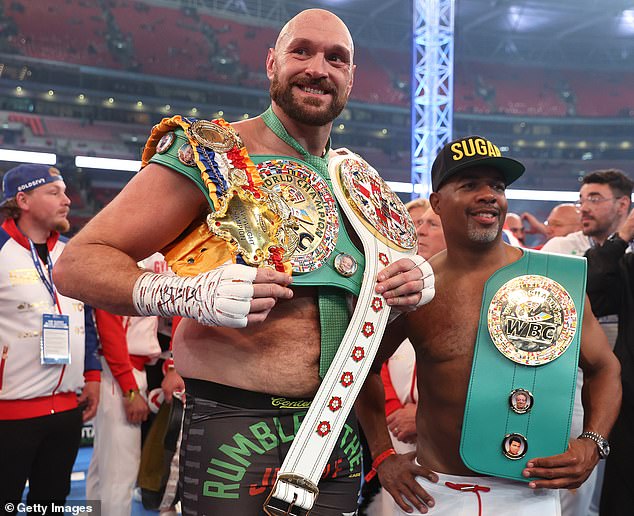 ‘I wouldn’t tell you [the game plan] because that’s giving the secrets away. But probably you’ll see what I’ll do.

‘Because when this little middleweight batters the bodybuilder again, he’s gonna lose again, then they’re gonna call for Achilles to come out.’

Fury reiterated that he would fight Joshua for free if he managed to wreak his revenge on Usyk, although he feels the outcome is unlikely.

‘Anthony Joshua’s a s***house and I’ll knock him out,’ he added.

‘If he beats Usyk, he’s gotta fight me for free in England, for the fans.

‘Not for hundreds of millions abroad in a foreign country, here, in the UK. Free-to-air TV, free tickets, sell out Wembley.

‘It’ll be watched by 30million people for free. No PPV. No money earned. We do this one for the fans of the UK.

‘Let’s see who’s the real man of the people.

“There has to be a trilogy vs Anthony Joshua, I deserve one more opportunity”- Andy Ruiz fumes