Noting that the festival was resuming after a two-year break, the president said: “We in Ukraine would also like to live the life as we used to and enjoy freedom and this wonderful summer, but we cannot do that because the most terrible has happened – Russia has stolen our peace.”

Volodymyr Zelenskyy has addressed Glastonbury – describing the festival as the “greatest concentration of freedom”.

A video message from the Ukrainian president was played ahead of The Libertines’ set at the Other Stage.

Mr Zelenskyy noted that the festival was resuming after a two-year break caused by the coronavirus pandemic.

He added: “We in Ukraine would also like to live the life as we used to and enjoy freedom and this wonderful summer, but we cannot do that because the most terrible has happened – Russia has stolen our peace.”

A message from President of Ukraine Volodymyr Zelenskyy was just played on the big screens at The Other Stage, shortly before The Libertines’ stage-opening set. #Glastonbury2022 pic.twitter.com/LuXf2FfEBf

The president vowed that his country “will not let Russia’s war break us” – and he wants to bring the invasion to an end before it “ruins people’s lives in other countries of Europe, Africa, Asia and Latin America”.

Mr Zelenskyy told the thousands of people listening in the crowd to “spread the truth about Russia’s war” and support Ukrainians who are forced to flee their homes.

Time is priceless and every day is measured in human lives. The more people join us in defending freedom and truth, the sooner Russia’s war against Ukraine will end,” he said.

He ended his message by saying “slava Ukraini” – “glory to Ukraine” in English – and this was met by cheers and applause.

A number of Ukrainian bands are performing at Worthy Farm in Somerset this weekend – including the Kalush Orchestra, who won this year’s Eurovision Song Contest. 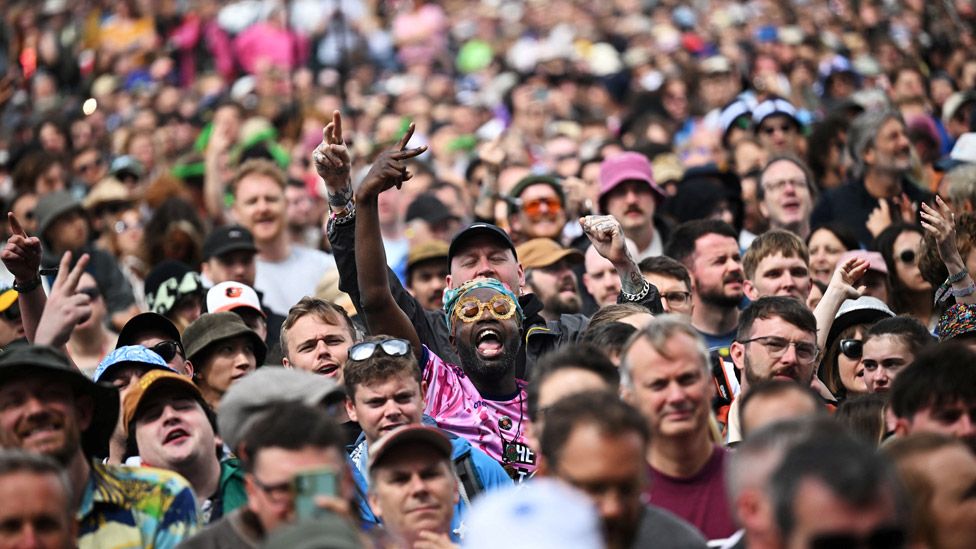 The band, who formed in 2019, are going to bring their brand of “Ukrainian folk music, rap and hip-hop” to Shangri-La’s Truth Stage on Friday.

Ahead of the show, frontman Oleh Psiuk said they were excited for their first-ever performance in the UK, and hoped it would be the first of many.

And he hinted: “We are very grateful for all the support we receive from the people of Britain, both for us and our country, and we are preparing a very special Ukrainian surprise for the fans at Glastonbury.